an ongoing argument among everybody ever

Do people behave as they do according to genetic predispositions or even “animal instincts” or do people think and behave in certain ways because they are taught to do so?

Nature versus nurture is an ongoing debate among scientist about how humans develop physical, mental, and emotion traits unique to them. The nature side of this debate argues that people are products of a genetic timeline in which evolution and other characteristics have molded all of their ancestors up until you and you are the final product of that timeline. According to nature, all of your characteristic such as the way you look, the way you feel, the emotions you feel, etc. are already inside of you via genetic code and are turned on and off by you biological clock.  Evidence that found this to be true﻿ is a study that found language is gained through the use of an inborn language acquisition device, Chomsky(1965).
On the other side of this argument is the people who believe you are born with certain genetic characteristics, such as height, eye﻿ color, etc., but for the most part you are born with a blank slate in which is filled by your environment. This environment includes all the physical, mental, and emotional instances you are exposed to from the time you are born. The stimulation your brain gets from environmental interaction is what shapes you as you grow and learn.  You are constantly learning, especially when you are an infant, and all this knowledge of your surroundings molds you. Love and affection from other people are vital too.  In a study done in 1977 by Albert Bandura, he found that agression is learned fromt he environment through imitation and observation

I agree mostly with the nurture side because i have seen instances in which experiences of people have made them into who they are today. I find the movie Good Will Hunting a good example of this. Will Hunting is a genius by nature. He was born with incredible talent and it only helps that he enjoys reading and knowing a lot of this that leads to his vast knowledge. However, for someone that was born with such great brain capability, Will has had a hard life in which cigarettes were put out on him and he was stabbed. These life experience make him an asshole and he pushes people out of his life, like his lover Skyler. You would think (according to nature standpoint) someone with that vast knowledge by birth would be able to have the perfect genetic code to lead them into a wonderful life in which they exercise all of their power. However that is not how it is because all of Will's past life haunts him and he is scared to try new things such as love skyler because of it. It finally takes his psychiatrist at the end of the movie to remind him that none of the bad things that happened in his life were his fault, but a product of all the bad people and things he was exposed to. Will could have been the smartest person in the world for it was given to him, but due to his experiences from the nurture standpoint, he lives a moderate, blue-collar life of which he is happy with.
I chose this side of the argument because I have experiences in which i believe have molded me in certain ways. these instances could have not possibly been in my genetic code, for it is impossible to have a foretold future in your genetic code. There have been several studies done on identical twins in order to prove the nature vs. nurture case. Theoretically, twins should be the exact same in all aspects. Even if separated, and they live totally different lives, their genetic makeup should make them into virtually the same person.  American psychologist John Watson performed a study on an orphan named Albert in which he "programmed" the infant to have certain traits. This experiment was much like the one done by Ivan Pavlov and the dog. 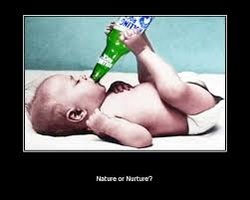 this is a good picture because it has been found that alcoholism is a genetic trait. Then why aren't babies raging alcoholics??????????????
http://journals.psychiatryonline.org/data/Journals/AJP/3974/1932-a.pdf